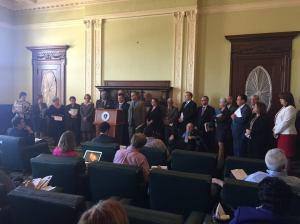 Representative Jeffrey N. Roy (D-Franklin) joined his colleagues in the Massachusetts House of Representatives to pass its FY16 budget which emphasizes economic growth through investments in multiple areas including education and local aid, reform to the state’s transportation system, and an acute focus on improving behavioral health services.

The $38.05 billion spending bill highlights the House’s ongoing commitment to fiscal prudence and targeted investments, a practice that has resulted in Massachusetts retaining its AA+ bond rating, the highest in the state’s history. The budget includes no new taxes or fees and reduces its reliance on one time revenue sources. For the first time since 2007, it does not withdraw any funds from the Commonwealth’s stabilization fund, leaving the balance in excess of $1 billion.

“The House of Representative’s budget demonstrates that through fiscal prudence and thoughtful investments we can achieve sustainable economic growth and set the standard for aiding citizens facing adversity,” said House Speaker Robert A. DeLeo (D-Winthrop). “As in the past, we have had the foresight to take immediate action on issues like transportation reform and local aid funding, while laying the foundation for long-term excellence through early education and care and workforce development.  I am particularly proud of our focus on behavioral health which emphasizes the need to consider prevention, access and recovery. I thank Chairman Dempsey and the members of the House for their outstanding work on this budget.”

“This budget strikes the right balance between fiscal discipline and smart investing in the programs and services that matter most to our constituents,” said Representative Brian S. Dempsey, Chair of the House Committee on Ways & Means (D-Haverhill).  “I thank Speaker DeLeo for his leadership in ensuring that this budget reflects the priorities of all members of the House of Representatives as reflected in its bi-partisan and unanimous support. The House budget devotes funding to invest in our future by providing significant new resources to early education, school aid, and economic development, while also proposing creative new solutions to tackle the Commonwealth’s challenges especially in the areas of opiate addiction and homelessness.”

“This budget is a true reflection of our commitment to investments in education and economic development, while also proposing creative new solutions to the Commonwealth’s challenges,” said Representative Roy, a member of the House Committee on Ways & Means. “I thank Speaker DeLeo and Chairman Dempsey for their work in helping us build a strong set of policy statements in a fiscally prudent manner that gained unanimous support among the House members. I am also delighted that we were able to secure funds the purchase of school safety zone lighting for Franklin and Medway, along with $50,000 for the Horace Mann Park and statue.”

The budget enhances the House’s longstanding reputation as a champion of municipalities. FY16 marks the first time that Massachusetts has access to slots revenue, providing a new funding stream of about $105 million. Investments in local aid include a $35 million increase to Unrestricted General Government Aid and an all-time high in chapter 70 funding of $4.5 billion, providing an increase of $25 per pupil.

The budget takes immediate steps to address systemic management problems at the MBTA by including a series of procurement reform tools such as a 5-year moratorium on the Pacheco Law. The budget will call for an independent audit of the T’s maintenance protocols and fiscal liabilities. It also strengthens the Inspector General’s  internal special unit to monitor the quality, efficiency and integrity of the department’s operating and capital programs. These updates follow the two transportation reform plans accompanied by major funding increases the House has passed since 2009.

Further distinguishing Massachusetts as a national leader in education, this legislation makes targeted investments in early education and care (EEC) that underscore the House’s ongoing commitment to the Commonwealth’s youngest students. The budget creates a framework to support expanded access to high-quality EEC programming while recognizing the efforts of our EEC workforce. Provisions include:

Recognizing that education and economic development are intrinsically paired, the budget restores funding to two of the House‘s hallmark programs. It also enhances the House’s focus on bolstering job opportunities for residents of all skillsets in diverse regions of the Commonwealth.

The FY16 budget strengthens behavioral health efforts in last year’s budget and the landmark substance addiction law through numerous investments and programs. Many of the provisions focus on co-occurring disorders and finding sustainable ways to aid in both prevention and recovery including:

The budget will now go to the Senate.