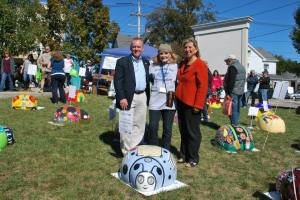 After a summer of touring and festivals, the ladybug sponsored by Franklin’s State Legislative delegation has found a new home. And where better than the home of Franklin’s government.

On Tuesday, February 10, 2015, Representative Jeffrey N. Roy (D-Franklin), Senator Karen E. Spilka (D-Ashland) and Senator Richard J. Ross (R-Wrentham) will be hosting a ceremony delivering the delegation’s ladybug to town officials. They will also commemorate the 40th anniversary of the class project that successfully traversed the legislative process and made the Ladybug the official bug of the Commonwealth.

In 1974 Ms. Pamela Johnson’s second grade class from the Kennedy School in Franklin was learning about the Legislative process when they decided that they would like to make a difference and try their hand at legislating. Since Massachusetts already had an official state bird, tree and fish, they decided that the State needed an official bug. Ms. Johnson’s class pooled its resources and with the direction of their State Representative worked through the committee process, visited legislators, lobbied on the bill’s behalf and ultimately passed the bill that made the Ladybug the official Bug of the Commonwealth.

“Forty years ago, that second grade class got the ultimate civics lesson and had a direct hand in legislating,” said Representative Jeffrey Roy.  “For one of the students in the class — former Rep James Vallee — it sowed the seeds for a 19 year run on Beacon Hill. I am thrilled to honor and recognize that class today, and hope that this ladybug will be a reminder to everyone who visits Town Hall that they can play a direct role in their government.”

“The ladybug story is a shining example of how an idea can be translated into law,” said Senator Spilka. “I hope that the Franklin delegation’s ladybug will be a constant symbol of the power of civic engagement, encouraging more people in our community to get involved in the political process and make their voices heard.”

“We truly live in a remarkable state when citizens, no matter what age, have the ability to impact the legislative process,” said Senator Ross. “Forty years later, this testament remains true, and it is a privilege to recognize the success of the Kennedy School with this ladybug that will reside in Franklin Town Hall for generations to come.”

The brief ceremony will take place on February 10 at 6 p.m. at the Franklin Municipal Building. 355 East Central Street Franklin, MA 02038. Any questions can be directed to Christopher Yancich at 617-722-2400 or by email at Christopher.Yancich@MAhouse.gov